Sub>urban aims to search an innovative and collaborative solution to the following challenge: How can we make existing 20th-century urban tissue attractive and qualitative again? How can we add a different urban layer?’’ By reconverting the 20th-century neighbourhoods, it will create a more sustainable and attractive environment. The network partners are all united through the pressure on urban tissue due to rapid growth today or uncontrolled growth in the past that resulted in high densities or mono-functional areas. Sub>urban network focuses on solving the challenge in a very particular context of:

– Parallel development of an experimental setting as well as an action plan for tangible areas. 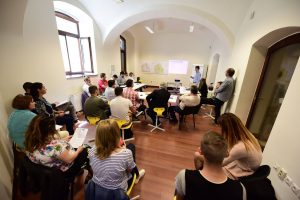 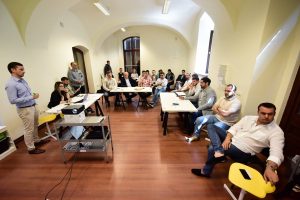 WHAT IS THE FRINGE? In the context of the SUB>URBAN project, we want to tell that we utilize, the fringe” of the modern city, to refer to the area that lies outside the historical city centre of Baia Mare and the outskirts. This should not be treated as two distinct zones, as the city merges perceptibly into the culture and life of the city centre by way of mixed green open space on the outskirts. Why focus on the fringe? The city sprawls haphazardly, making rapid advances at one point, and hardly moving at all at another. This results into the incoherent urban structure, buildings waiting for renovation, high maintenance costs/low-quality public spaces, traffic congestion/ non-sustainable environment, little human interaction, barriers, mono-functionality which are the characteristics of the fringe. This pattern of uncontrolled urban development manifests seriously in a fringe area, due to lack of planning and effective development control measures.

Development in the area of the Săsar neighbourhood is characterized by the rapid growth of segregated communities that are gated or otherwise characterized by restricted access.
The fringes still remain places of intense competition for resources and threats to ecosystems. Reinventing the fringe is about countering urban sprawl, by transforming this complex area in the city of Baia Mare, into a more attractive and qualitative neighbourhood for the community. Through a flexible process and an implementation-oriented approach, we seek to reinvent planning. Going back to the Săsar neighbourhood fringe, we have got the tension, the interrelationships between ecological and environmental systems and meeting needs of Baia Mare. To put it bluntly, fringe community endowed with poor infrastructures and urban services will become an obstacle to future sustainable urban development or a burden for local budgets. Particularly in the context of urban expansion, where there is an ongoing unregulated growth of urban activity in the fringe, a form of invisible urbanization is occurring.

The physical aspect is represented by an inner zone. The area is in an advanced stage of transition from the historical city centre to the outskirts. Another aspect is of social change in attitudes, of the people of the outer fringe. Now with the impingement of urbanization, city centre influences have begun to infiltrate and social transformation takes place. In particular, we have drawn attention to the importance of the fringe and their important role in future urbanization: current fringe -> embrace existing quality -> adapt lesser quality -> encourage interaction -> increase mobility -> RESULT: new, attractive fringe.

There is a deep rift in productivity, lifestyle, employment chance and investment between the historical city centre and the outskirts. This situation is threatening the sustainability of the city of Baia Mare, of the urbanization process and development as a whole. It is necessary to reinvent the fringe, to escape from the threats of erosion and ignorance of public space and balance the social exchange.