The city of Brașov is Romania’s 7th largest city, with a population of around 250,000 inhabitants, and the biggest one in the Development Region Centre. The city is also the centre of one of the most urbanised metropolitan area in the country, gathering a population close to 400,000 inhabitants. Located approximately 180 km north to the capital city of Bucharest, Brașov is one of the oldest cities in Romania, its foundation leading back to the beginning of the 13th century.

Located in a depression to the north of the Postăvaru mountain, the city and its surrounding area are well-established touristic destinations due to both natural heritage (Tâmpa mountain and Postăvaru mountain natural protected areas, with the latter including the Poiana Brașov resort – the biggest ski resort in Romania) and built-up heritage (medieval city of Brașov, medieval fortresses of Râșnov, Prejmer and Hărman, located nearby). All in all, the city of Brașov has over 400 listed historic monuments, according to the latest evidence made by the Ministry of Culture in 2015.

The city of Brașov has undergone significant transformations in the last 150 years, which are visible in its urban fabric: from an important commercial centre located at the border between Transilvania (under Austrian-Hungarian occupation) and Romania at the end of the 19th century, to the second most important industrial centre in Romania (after the capital city of Bucharest) during the communist regime, to a city focused more on services (including tourism) after the closure or relocation of industrial facilities after 1990.

Besides the economic changes, the city has also witnessed significant social and spatial transformations. During the last three decades it lost more than 20% of its population mainly due to out-migration (loss of German and Hungarian population), but also due to a natural population decline. Some of the population loss was also caused by the displacement of population to the outskirts of the city and to the neighbouring towns and communes. Despite its population decrease the city expanded in terms of spatial development by a quite rapid growth of new residential and industrial / service areas. The spatial transformations affected both the peripheral areas and the inner ones, especially the former industrial sites which were converted into residential, commercial or office areas. The process is undergoing and is accompanied by development of new road infrastructure around the city.

These new spatial and social-economic trends and developments may lead to various dysfunctions and a decreasing connectivity between the old core and the modern and contemporary city, whose development was strongly conditioned and directed by the very specific geography of the place. 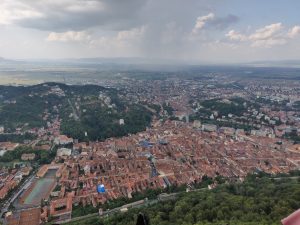 Getting to Brașov is easy, due to the fact that it is a major railway hub. There are daily trains from most Romanian cities, as well as almost hourly trains from Bucharest, the capital of Romania (the train trip takes approximately 2 hours and a half). Brașov is located 166 km from Otopeni airport (Bucharest International Airport) and 156 km from Sibiu International Airport.